In our Baseball Spotlight Arizona Diamondbacks 2021 season preview, we take a look at everything from last season to projections for the 2021 season. Let’s get started!

The Diamondbacks do not have an easy season ahead of them in 2021. This difficulty is because they have to face the Dodgers and the Padres a combined 38 times throughout the year. The Diamondbacks are not going to get swept, but they will have trouble competing with both of these squads.

The National League West is top-heavy, and the Diamondbacks will be unable to roll with the punches. They are not as bad as the Rockies, but they do not belong on the same field as Los Angeles or San Diego.

I am not being dramatic when I say that the Arizona Diamondbacks have no strengths. I guess you could call Madison Bumgarner a strength, but the veteran is way over the hill even though he is just over 30 years of age.

There is no way to sugarcoat the fact that the Diamondbacks are going to struggle in 2021.

If you do not have power, you cannot win the National League West with the Los Angeles Dodgers and San Diego Padres, both hitting balls to the moon daily. The Diamondbacks have three players who should crack 20 bombs in 2021. These athletes are Ketel Marte, Eduardo Escobar, and Christian Walker. These three will need to work together, so they each get some protection in the lineup. There are no other complete hitters on the team, so Marte, Escobar, and Walker are on an island with this lineup.

I do like Nick Ahmed in the eight-hole, but he is an average bat at best. Although, he does stand out at the bottom of Arizona’s lineup.

Marte finished fourth in the MVP race in 2019 and was selected to the All-Star team. Marte was not bad last season, but he lost a lot of power. In 45 games, he only went yard twice, which is not good compared to his 32-homer campaign the year before.

Eduardo Escobar had a similar power decline to Marte from 2019 to 2020. In 2019, Escobar hit 35 bombs, but last season he only went deep four times. Escobar has not been consistent in his career, so he is a wild card entering the 2021 season. Christian Walker was one of Arizona’s most reliable hitters last year. He slashed .271/.333/.459 in 2020 with seven bombs. This would be below average in Los Angeles or San Diego, but it’s exceptional in Arizona.

The Diamondbacks need Marte, Escobar, and Walker to mesh for the franchise to experience success. If they do not, the team will share a similar fate to the 2020 squad when they finished last in the National League West.

The best pitcher in the starting rotation is Madison Bumgarner. I know this is hard to believe, but Bumgarner is only 31 years old. He has been in the show since the age of 19, so he has a lot of pitches, but the southpaw is not old. 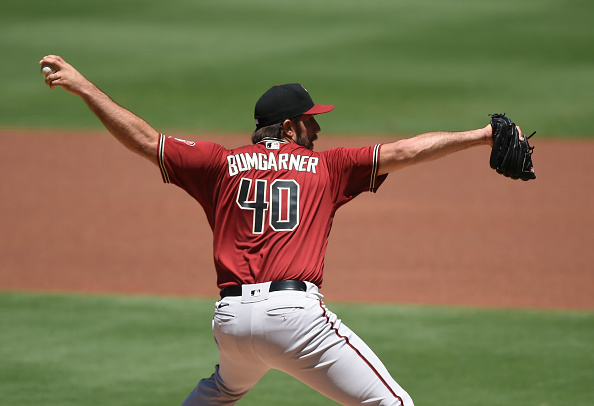 Bumgarner has four top-ten Cy Young finishes in his career, and he has averaged 209 strikeouts over his career. Last season, the pitcher was atrocious, racking up a 6.48 ERA.
The former All-Star needs to better in 2021…right?

My favorite pitcher besides Bumgarner is Caleb Smith. Smith had a 2.57 ERA in a relief role last year. He will be the third starter in 2021, so expect him to establish himself as a reputable big-league wing.

The Diamondbacks will not have Zac Gallen to start the season because of a hairline fracture in his throwing forearm. Gallen is the future ace of this team, so his presence will be missed to start the year.

Nevertheless, Gallen does not make the Diamondbacks a playoff team. The same principle applies in the bullpen. Joakim Soria, Stefan Crichton, Kevin Ginkel, or any of the relief pitchers on the team will not be able to lead Arizona to the postseason.

I think the Diamondbacks will be somewhere in the middle!

MORE FROM BASEBALL SPOTLIGHT: If you enjoyed our Diamondbacks 2021 season preview, be sure and check out all of our MLB team and division previews before the 2021 season’s first pitch is thrown!