American League All-Star Starting Infield: The MLB All-Star rosters are set for the biggest night in baseball on July 13. The consensus is that the fans made the correct decisions, and I could not agree more.

The storyline of the selections has been Shohei Ohtani being selected as a designated hitter and pitcher. I am tired of talking about Babe Ruth Jr., so I am going to focus on a narrative that needs a lot more attention than it has received.

Boston and Toronto own the American League All-Star starting infield thanks to Rafael Devers, Xander Bogaerts, Marcus Semien, and Vladimir Guerrero Jr. All four players were named starters in the mid-summer classic, and I cannot wait to see the athletes sporting their horrendous All-Star jerseys at Coors Field.

By the way, whoever designed those jerseys at Nike should be fired immediately.

Left Side, Boston Side

Xander Bogaerts and Rafael Devers have been the foundation of Boston’s success in 2021. Nobody, including myself, gave the Red Sox a chance in 2021, which was obviously wrong. The team is in first place in the American League East, and they have made their rivals in New York look pitiful all season.

Bogaerts, aka. the most underrated player in baseball, will receive MVP votes at the end of the season. He is slashing .326/.388/.540 with a league-leading 25 doubles and 48 RBIs.

Any player who can reach base safely nearly 40% of the time is an MVP caliber player, but many people do not understand Bogaerts’ talent.

Bogaerts will be joined on the left side of the infield by Rafael Devers. Devers is not underrated because he has one of the best personalities in the game. Devers beat out Jose Ramirez at third base to be named the American League starter.

There is no question that the 24-year-old is the best third baseman in the game. He is on track for 40 HR and over 100 RBIs. With a week until the break, he has blasted 20 bombs and driven in 68 runners.

Joined by their Neighbors to the North

The Toronto Blue Jays will win the American League East in the coming seasons. The team is in the hunt for a Wild Card bid in 2021, which is remarkable considering the average player age. The Blue Jays are among the youngest teams in the game, but Vladimir Guerrero Jr. has not let this define his play. 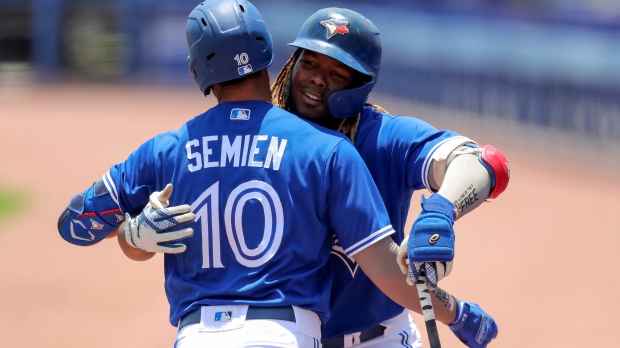 Guerrero Jr. has blasted 27 homers this season, but he does not lead the league in this category, thanks to Ohtani. However, the Blue Jay has done everything for his team, and he has shown no sign of slowing down.

Guerrero Jr. will be joined by Marcus Semien on the right side of the infield. This will be Semien’s first All-Star Game after nine seasons. Nobody deserves the bid more than the 30-year-old.

The 2021 American League All-Star Infield is an indication of the future landscape of the division. Do you understand what I am saying?

If not, let me spell it out for you. Boston and Toronto will be the teams to beat for years in the American League East.

Vlad Jr. is Proving that Launch Angle isn’t Everything

Vlad Jr. is Proving that Launch Angle isn’t Everything: There is a new home run leader in the show as of Saturday, and his name is Vladimir Guerrero Jr. Guerrero received a fastball on the […]