The Phillies were not swept by the San Francisco Giants on Wednesday, thanks to Bryce Harper. In the seventh inning of Wednesday’s contest, Harper stepped up to the plate and delivered in front of 9,537 people at Citizens Bank Park.

The six-time All-Star hit a game-tying bomb in the seventh inning, and Andrew Knapp finished the job with a walk-off single in the ninth.

It’s a known fact in Philadelphia that the Phillies follow Bryce Harper’s lead, and Thursday was another example.

Dominant in the Past Five Games

Bryce Harper has looked locked in at the plate, and the power is starting to develop. Harper has been dominant in his past five games, batting .647 with two doubles, two home runs, and four RBIs. 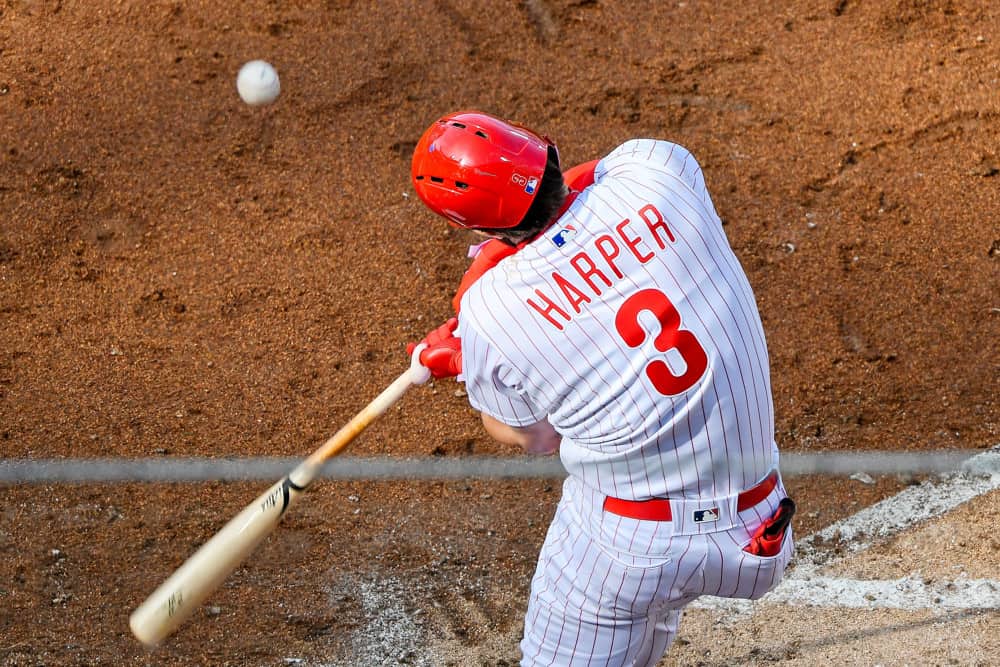 Harper’s statistics have not translated to the win column in Philadelphia, which is disappointing for the city. The team is 2-3 in their past five, but they are in second place in the division.

“For him to be able to go out and put the stretch of at-bats he’s put together so far, we all know he can do that. He knows he can do it. It’s funny because the other team is trying to get him out, too, so for him to be able to just get three hits every night is really impressive. That guy cares. He cares a lot. He wants to win a lot. That was a big homer by him. It got us back in the game. We were kind of down and out there for a second. For him to come up and do what he did is why he is who he is.”

Philadelphia has never seen Bryce Harper playing like he is to start the 2021 campaign. He has been dominant at points in his career, but his first two years with the team have been underwhelming.

He led the National League in walks with 49 in 2020, but the Phillies are paying him to lead the league in power numbers.

The former MVP slashed .262/.385/.518 in his first two seasons with Philadelphia. He was not named to the All-Star team in 2019, and he has not received any postseason accolades.

If Harper continues his 2021 dominance throughout 162, he will be an All-Star and earn a spot on the All-MLB squad.

Harper has only hit four bombs, but he seems to be finding his stride, blasting two in the past games. He has also driven in four of his seven RBIs in the past five games.

The outfielder is getting hot at the perfect time for the Phillies.

Up Next for the Phillies

Philadelphia is 9-9 and in second place in the National League East behind the Mets at 7-6. The early signs have shown that the NL East is up for grabs in 2021.

The East will be a tight race, and the Phillies could be in the mix down the stretch. The team looks different when Harper hits, so he will need to play like one of the highest-paid players in baseball.

However, I think this is likely with Harper’s early-season production at the plate. Following the game, starting pitcher, Zach Eflin gave a quote that perfectly summarized Bryce Harper as of late.

“To say he’s locked in is a pretty significant understatement.”

Baseball Spotlight’s own Tanner Kern breaks down every MLB team. Check out his Toronto Blue Jays 2021 Season Preview to stay up to date! […]