The Twitter world was shook on Tuesday night following a clip where Oakland pitcher Chris Bassitt was hit in the head with a liner off the bat. He was carted off the field in the second inning of Tuesday’s 9-0 loss to the White Sox.

This video is not easy to watch. Hope he is OK.

Bassitt started the frame by allowing singles to Eloy Jimenez and Yoan Moncada before Brian Godwin hit a 100.1 mph liner back at the pitcher. The Chicago crowd was silenced following the collision as trainers from both teams stormed the mound.

Bassitt had to be carried off in a cart, but he did not lose consciousness. He covered his face with a towel as he left the field and headed to the emergency room.

When I saw the video of Bassitt being hit on Twitter, I did not think he would be able to eat on his own in the future. However, this dude is a tough mother f’er because he is already out of the hospital. 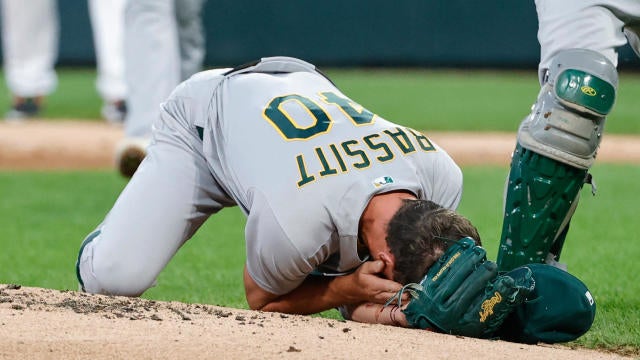 The A’s released a statement on Wednesday saying Bassitt had been released from the Rush University Medical Center after receiving stitches for two face lacerations.

The training staff revealed, “Bassitt was diagnosed with a displaced tripod fracture in his right cheek that will require surgery. An exam of his right eye was normal for vision, and no other damage is currently noted in the eye or the orbital bone. In addition, a head CT scan revealed no further injury.”

Bassitt was placed on the ten-day injured list with a right facial fracture, causing the team to call up RHP Paul Blackburn from Triple-A Las Vegas before Wednesday’s game against Chicago.

Comments from the Skipper

Bob Melvin was visually disturbed while addressing the media following the incident. It was one of those incidents which are rare, but part of the dangers of toeing an MLB rubber. He indicated that Chris Bassitt was going to be okay, but it was hard to believe in the moment.

“Bass is conscious, he was the entire time. We don’t think the eye is a problem at this point. It felt like it was below it. He’s got some cuts and used some stitches.”

Bassitt has been dominant throughout the 2021 campaign and his loss will be difficult to overcome for the club. Heading into Tuesday, Bassitt was 12-3 with a 3.06 ERA and sixth in the American League in strikeouts.

The A’s are in second place in the American League West, sitting 2.5 games behind the Houston Astros. If the season ended today, the A’s would be receive a Wild Card bid. Hopefully, Bassitt is able to return to the rotation to make a late season playoff push.

With the lockout still taking over the headlines around MLB, let’s take a look at what will likely be one of the most competitive divisions in baseball once it ends, the AL West. […]

The Oakland Athletics’ 2002 season was the most notable campaign in franchise history. The 2002 season was when “Moneyball” came to fruition in the big leagues because of A’s General Manager Billy Beane and his […]