Do you know the name D’Angelo Ortiz?

If you can name a designated hitter who was more clutch than David Ortiz, I will be astonished. Big Papi is one of the best designated hitters the game has ever seen. If the Red Sox needed a big swing, he was the man to deliver for over a decade.

Ortiz is a ten-time All-Star, a seven-time Silver Slugger, and a World Series MVP. We have seen second-generation stars shine like Vladimir Guerrero Jr., Fernando Tatis Jr., and Ke’Bryan Hayes in the past few seasons.

In the coming seasons, there could be another Ortiz headlining the MLB. D’Angelo Ortiz, a junior at Westminster Christian High School in Pinecrest, Florida, wants to follow in his father’s footsteps. The way his high school career is going, it looks like he will have this opportunity in 2022 with his name being called on draft day.

D’Angelo Ortiz has Always been Focused on One Goal

For as long as D’Angelo Ortiz can remember, he wanted to be a professional baseball player like his father. However, he does not want to be like David. He wants to be better than the three-time World Series champion. D’Angelo has been around the game for his entire life, watching his father bomb balls out of Fenway Park as a child. The child is now approaching 17 years of age and has become one of Florida’s top ballplayers.

D’Angelo Ortiz will be eligible for the 2022 MLB Draft. The 6’1” junior is aware of the work he has to do to be selected in the draft, but he is willing to do whatever it takes.

“What people don’t understand, too, is that day that you go into pro ball, it’s just the beginning. It’s doesn’t mean you did anything. That’s the beginning — and that’s where people figure out whether you’re really built for this sport. So this is the very, very beginning, and I’ve got a ways to go. But I’m all for it, and I want every part of the journey.” 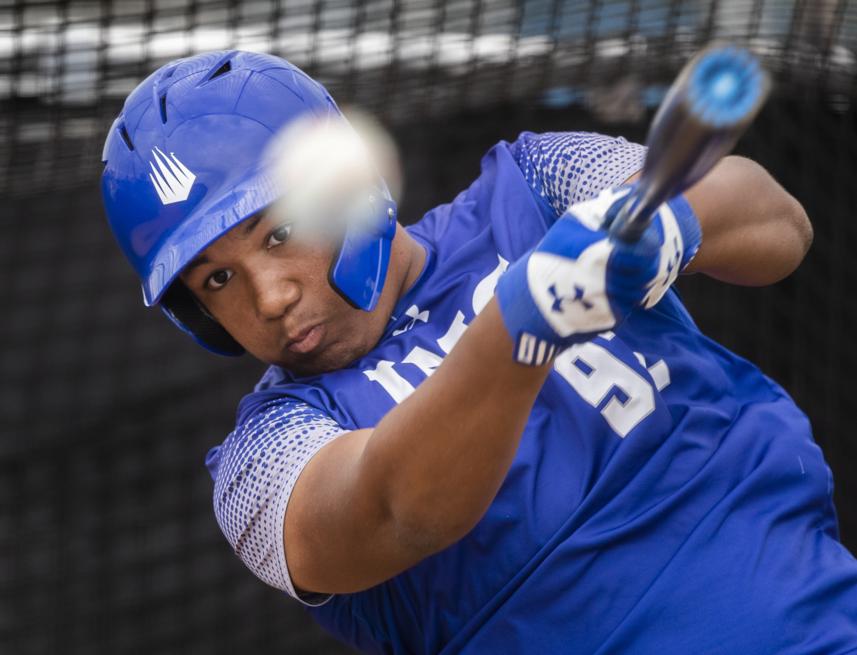 Ortiz is aware of the grind, but that is what he loves about the sport, and that’s what made his father so successful. D’Angelo has been motivated by seeing other second-generation ballplayers succeed in the big leagues.

The Toronto trio of Cavan Biggio, Bo Bichette, and Vladimir Guerrero Jr. is one of the trios that the young Ortiz admires. He is also a fan of Fernando Tatis Jr. in San Diego, who recently signed a 14-year, $340 million contract.

All of these second-generation stars have stepped out of their father’s footsteps and become their own ballplayers. That is D’Angelo’s goal, but it will be no small task. However, the young buck is up for the challenge.

Thoughts on His Son

David Ortiz is not trying to push his son into professional baseball. In fact, he would like to see his son get an education, but he is supporting his child’s dream.

“D is taking this very serious. I’m telling you that, right now. He wants it. I’m not putting any pressure on him. What I want him to do is educate himself. It’s not like I’m putting him against the ropes. The one thing that me and Tiff want is for him to educate himself, get good grades, and we support him on the baseball thing. He doesn’t need to be pushed. That’s what I’m trying to tell you. He’s pushing himself.”

D’Angelo has excellent roots, but you should not think that he is not driven. He is willing to do whatever it takes to get to the big leagues. I believe his focus at a young age will make the difference against the other prospects in 2022.

Follow me on IG @tannerkern and Twitter @tannerkern_ for game previews, betting analysis, and the best stories from the sports world. Check out my baseball show, Between the Lines every Sunday at 6:00 PM ET. Make sure and keep up with the Sports 2.0 Network, Sports 2.0 Twitter, Basketball Articles, Baseball Spotlight, and  Knup Sports for all of my latest content and best takes from around the sports and sports betting world as well!!

When Harrison Bader took his first handful of at-bats for the St. Loui Cardinals, I was instantly drawn to him. At the time, I dreamed of having Bader and Magneuris… […]

On Wednesday, the league officially released the 2022 MLB schedule, and fans quickly noticed that they would be treated to an opening day on March 31st. […]