The Toronto Blue Jays made a triumphant return to the Rogers Centre in Toronto on Friday evening against the Kansas City Royals. The Blue Jays bested the Royals by a 6-4 margin, but this game was about much more than the final score.

Toronto’s return to the Rogers Centre signified a return to normalcy for the team amid the COVID-19 pandemic.

The Blue Jays over the past two seasons have been defined by displacement. The 2020 calendar shook the entire league, but Toronto was displaced from their home. They were forced to start the 2020 campaign in Buffalo, New York, at the club’s Triple-A stadium.

This stadium needed a massive upgrade because it was nowhere near big league standards. After the 60 game slate, Canada was still not allowing the hometown team to return for the beginning of the 2021 season. 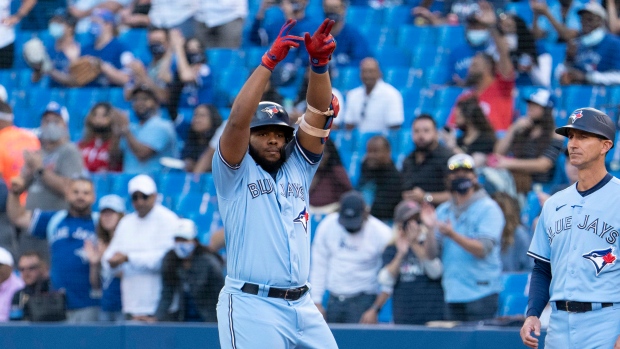 Toronto elected to start the 2021 schedule at their Spring Training complex in Dunedin, Florida. This allowed for necessary renovations in Buffalo to make the stadium more equipped for an MLB franchise.

The Blue Jays moved back to Buffalo in June and played home games there until Friday evening. Toronto returned to the Rogers Centre in style. There were only 13,446 fans in attendance, but they were real fans that had not seen their team in nearly two years.

Homecoming for the Blue Jays

The players marveled at the crowd in attendance on Friday evening against the Royals. The Blue Jays were propelled to victory thanks to All-Star sluggers Bo Bichette and Teoscar Hernandez.

These two electrified the crowd with a two-run homer and solo shot, respectively. George Springer added three hits and an RBI in his first game as a Blue Jay inside the Rogers Centre.

Toronto’s win was the first at home since their last game in the stadium on September 29, 2019. After the game, Bichette thanked the fans for their support through the hard times.

“It felt like we had our real fans. Definitely a good pickup for us. A lot of exciting things have been happening. So excited to be here.”

The Blue Jays have fans in Florida and Buffalo, but it’s nothing like the presence of baseball fanatics in Canada.

He went onto say, “We’ve kind of been trying to pretend like we had a home. It’s difficult to do for two years, so when we finally come back here, it definitely feels like a big weight off our shoulders. Just super excited to be here.”

Toronto did not return home and beat the Royals, who are 8-2 in their past ten games. They also made noise during the trade deadline, establishing that they are competing for the American League Wild Card.

The Red Sox and Rays will be hard to catch in the front of the division. Nevertheless, the Wild Card race is wide open, and Toronto now has All-Star RHP Jose Berrios to help in their playoff push.

The Blue Jays are back.

Is Vladimir Guerrero Jr Going to Win the Triple Crown?

Vladimir Guerrero Jr. is on pace to claim the Triple Crown Award, given to a player who leads their respective league in hits, home runs, and runs batted in. […]

American League All-Star Starting Infield: The MLB All-Star rosters are set for the biggest night in baseball on July 13. The consensus is that the fans made the correct decisions, and I could not agree […]