Shots could be heard on the television broadcast as the Nationals were walking to their dugout to switch sides heading into the bottom of the sixth inning.

“I just want to assure the public that at no time during this incident were individuals inside the stadium attending the game in any kind of danger,”

“This was not an active shooter incident and it’s not being investigated as such.”

The incident occurred right outside of Nationals Park on the 1500 block of S Capitol St SE in Washington D.C.; reports initially indicated that four people were injured during the shooting, though that number is now understood to be three— no deaths have officially been announced as of early Sunday morning. 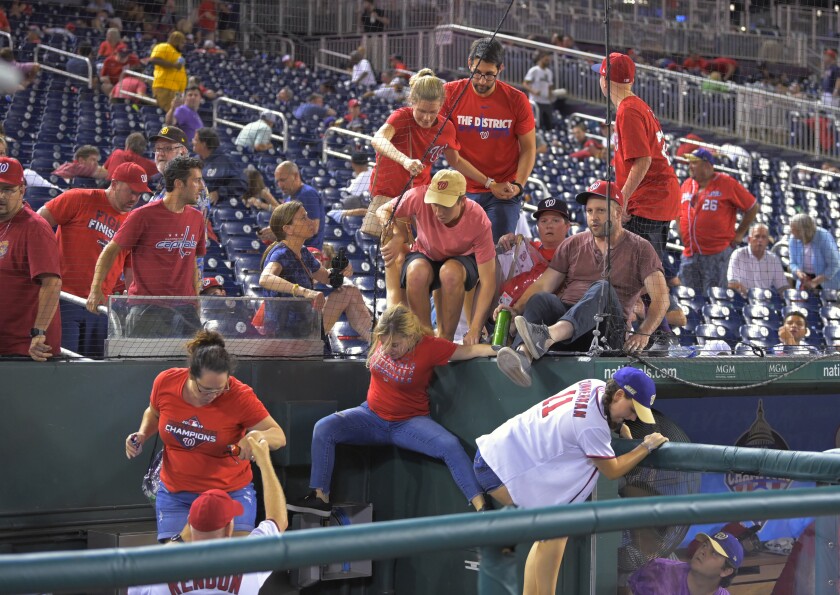 The Nationals issued a shelter-in-place order shortly after getting word that the incident had occurred outside of the stadium and did their best to keep everyone inside the gates and off the streets, communicating their messages via the scoreboard in the outfield.

According to Scott Fear, Vice President for Public Safety and Security for the Nationals, the order was implemented to keep everyone as safe as possible.

“We held shelter-in-place for approximately 10 to 15 minutes. At that time we said fans were allowed, not that they had to, but they were allowed to exit through Center Field Gates and Right Field Gates on the other side of the stadium, because MPD had let me know that it was safe enough that they could go outside, out of the gate that way.” – Scott Fear

Though it is now understood that nobody inside the stadium was a target in the shooting, unsuspecting fans in the crowd did not know what the situation was and reacted with haste. While some made a beeline for the exit and attempted to scramble to their cars, or anywhere outside the stadium, others rushed down towards the field to look for cover.

While many players on the field scrambled for safety, three members of the Padres— Fernando Tatis Jr., Manny Machado, and Wil Myers— opened the gate onto the field and helped escort fans into the dugout and back to the clubhouse in search of safety. Tatis Jr. sent a short message on Twitter to everyone in attendance a few hours after order had been restored inside the park.

Hope everyone is safe! Just keep the prayers up?? thank you everyone that help in the front line ! God bless ??

“Hope everyone is safe! Just keep the prayers up thank you everyone that help in the front line! God bless,” – Fernando Tatis Jr.

Executive Assistant Benedict later informed members of the media that the night’s events were a shootout between two vehicles, one of which had already been recovered. Two of the injured parties were located alongside the vehicle and both are being questioned, though the extent of their involvement is unknown.

The third fan that was shot was a Nationals fan walking outside of the stadium; she is expected to make a full recovery.

The Nationals-Padres game will resume on Sunday at 1:05 p.m. ET and will pick up where they left off in the bottom of the sixth inning and with the Padres up 8-4, according to Washington’s official Twitter account. “25-45 minutes” after the suspended game has been completed, Sunday’s regularly scheduled matchup will commence as a normal nine-inning affair.

Tonight's game has been suspended due to an incident surrounding Nationals Park.

As MLB teams start to reveal thier brand new mlb city connect jerseys, which one takes the cake as the best? […]

The AL East is expected to be a very competitive division in 2021. In this AL East preview, we take a look around the division so you don’t have to! […]