On Friday, rookie pitcher Ian Anderson proved that no moment is too big. The 23-year-old threw five hitless innings and struck out four, leading Atlanta to a game three victory at Truist Park. Once Anderson left the game, the Braves bullpen finished the job bringing the no-hit bid into the eighth inning and finishing the game with a shutout.

Atlanta now has a one-game advantage in the World Series and a chance to finish off the Astros at home with two consecutive wins. However, Houston was in this exact scenario in the ALCS against Boston before winning three straight contests to advance to the Fall Classic.

Anderson took the mound in a rainstorm, and it seemed like control would be an issue after one inning. He could not throw his breaking ball for a strike, and this is not a winning recipe against Houston, an offense with tremendous pitch selection.

However, the youngster dialed in and continued to battle weather conditions, crafting a World Series gem on the hill. He only threw 39 of 76 pitches for strikes, but it gave Atlanta the required start to pull off a 2-0 victory,

Anderson is now 4-0 in eight career postseason starts over two seasons. The right-hander now holds the second-longest no-hit performance by a rookie starter in the World Series behind Jeff Tesreau for the New York Giants in 1912.

Tesrea’s game was broken up when Boston’s Tris Speaker tripled with one out in the sixth inning.

After the game, Anderson praised his manager Brian Snitker for pulling him in the moment, even if he wanted to go out for one more inning.

“It was fine. I have the utmost trust in Snit and the bullpen, those guys coming in. You don’t get a nickname if you’re not shut down like they are.”

There was a limited amount of offense for both teams on Friday night in Atlanta. The teams combined for eight hits and 17 strikeouts on the night. The Braves left nine runners on base, but they were still able to prevail thanks to Travis d’Arnaud. 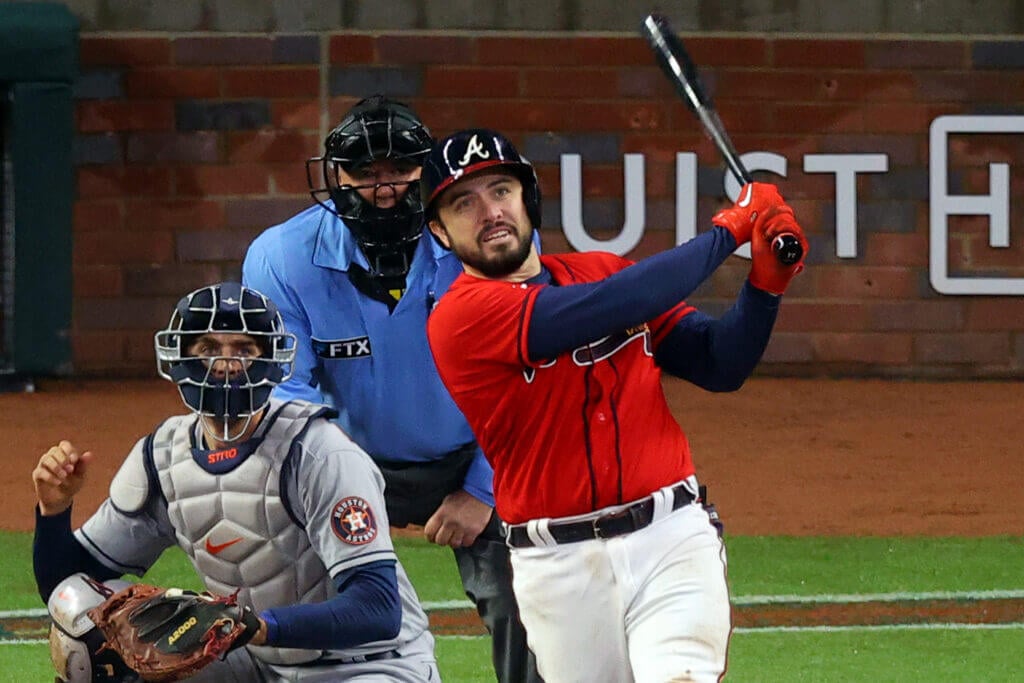 D’Arnaud had two hits on the night with a homer and an RBI. Austin Riley drove in the other run for the Braves in game three of the ALCS.

The Astros are set up better than the Braves if they can win on Saturday. Atlanta will have two bullpen days where Houston will only have one in game four.

Zack Greinke will start the Astros, and they will need him to be his vintage self to succeed. Greinke has been inconsistent throughout the 2021 season, and the same has been true in the postseason.

Dylan Lee will be the first pitcher to throw for Atlanta. The left-hander has only thrown 4.2 innings in his MLB career, including two frames in the postseason.

He has a 3.38 ERA over this brief stretch with three strikeouts. Snitker is expected to let the rookie go two innings in game four. The first pitch is scheduled for 8:09 PM ET, and both teams are EVEN on the money line.

Check out Nick’s rankings of the last five World Series. See why Nick things it’s important to do so. […]

Being able to handle the media and appropriately answer interview questions as a professional athlete is an important part of the job. Here are some of the worst interview responses from this year’s World Series.
[…]