In our Baseball Spotlight Texas Rangers 2021 season preview, we take a look at everything from last season to projections for the 2021 season. Let’s get started!

The Rangers have made it clear that they are rebuilding, but I want to see them take some steps forward in 2021. The American League West is the best division for the Rangers this season because no team is a World Series contender.

Texas fans have to understand that the Rangers are a work in progress. There are very few positions set in stone, so expect manager Chris Woodward to showcase multiple lineups throughout the season.

The Texas Rangers have many young players as well as athletes in the middle of their career who have their last shot at making a statement in the big leagues. The Texas Rangers are rebuilding, and there are always growing pains during this process.

However, all the news that I have heard from Rangers camp has been nothing but positive. I listened to skipper Chris Woodward, and he said the team is the closest club he has ever been a part of, considering the team’s young core.

The Rangers are focusing on developing their young players, with wins coming secondary in 2021. Texas is focused on the long-term plan instead of short-term success. If the fan base keeps this in mind, it will help them get over the occasional lackluster play that will be evident in Arlington.

The Rangers have a challenging situation in their batting order because they do not have any multi-dimensional hitters. This squad is going to have to manufacture great at-bats and work counts to garner success.

The team’s power hitter is Joey Gallo. Gallo is a one-time All-Star in 2019 and the defending American League Gold Glove right fielder. Gallo should hit 35+ bombs, but he cannot hit for average.

Gallo’s strikeout rate is alarming. In 2019, Gallo struck out 38.4% of the time. Last season, he was sat down on strikes 35% of the time. Gallo does not have a good eye, so he will not protect other batters in the lineup too often.

The most promising hitter in the starting lineup is Nick Solak. Solak is a 26-year-old second baseman who had a solid rookie campaign in 2020. Solak slashed .268/.326/.344. The slugging percentage was not abundant, but Solak is valuable because he gets on base.

Solak should leave the Rangers in on-base percentage in 2021. Solak was a second-round pick in 2016 out of Louisville, so keep an eye on him this season. He should be one of the most valuable players on the Rangers this year.

Khris Davis should be the DH for Texas in 2021. He was a new addition to the roster in the offseason. Chris Woodward has called Davis a true professional. He will have to hit to stay in the lineup, but I believe he is with Texas to help mentor the future stars in the game.

The Rangers will struggle to score runs until they find a lineup that gains some momentum. There will be many peaks and valleys with this offense, but that is a given in the rebuilding process.

The pitching staff of the past is gone in Texas. Lance Lynn and Mike Minor’s days being the best one-two punch in baseball are over in Arlington. The Rangers do not have an established lineup yet. It will change a lot throughout 2021 in an attempt to get young players their training.

Chris Woodward has also stated that he does not want to tax any of the young arms, considering a lot of them did not acquire much in-game experience in 2020.

The Rangers signed Mike Foltynewicz in the offseason. He signed a one-year deal worth $2 million. Foltynewicz was an All-Star in 2018, but he is definitely not an ace-caliber pitcher at this point.

Foltynewicz is only in his age 29 season, so he still has plenty of time to become an All-Star again. The right-hander is competing for more than a job this season. He is pitching for a contract extension.

Dane Dunning is the youngest arm in the rotation, and he can be a great MLB starter in the future. Dunning went 2-0 last season for the Chicago White Sox with a 3.97 ERA in 34 innings.

Dunning could be the guy who gets the ball on Opening Day in 2022 if he progresses like a young first-round draft pick is expected to in his fourth professional season. 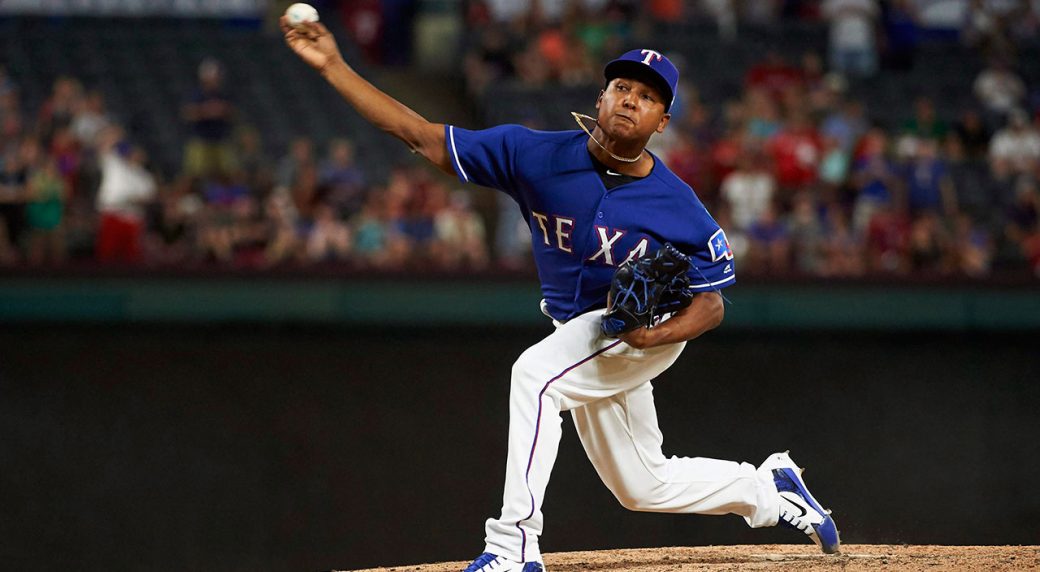 In the bullpen, Jose Leclerc is poised for a big season. He missed most of 2020 with a shoulder injury, but he has looked electric in Spring Training. It’s probable that Leclerc will be closing games for the Rangers in 2021.

The future of the Rangers is bullpen is a left-hander named Taylor Hearn. Hearn tossed 17.1 innings with a 3.63 ERA. He struck out 23 batters out of the bullpen. The ball is electric when it leaves his hands, so I believe he will handle most relief innings when he is available.

I think the Rangers rebuilding mindset is perfect for 2021, but I want to see improvement throughout the year. The front office should monitor innings and focus on analytics in preparation for 2022.

MORE FROM BASEBALL SPOTLIGHT: If you enjoyed our Rangers 2021 season preview, be sure and check out all of our MLB team and division previews before the 2021 season’s first pitch is thrown!

In our Baseball Spotlight San Francisco Giants 2021 season preview, we take a look at everything from last season to projections for the 2021 season. Let’s get started! The Giants missed the expanded postseason in […]