Sorry, Fernando Tatis Jr., Wander Franco will be the most exciting player in baseball shortly. The #1 prospect in baseball made his MLB debut on Tuesday evening for the Tampa Bay Rays. The Red Sox bested the Rays in the 11th inning, but Franco stole the show.

The 20-year-old was 2 for 4 with a homer, double, three RBI, two runs, and a walk. His first MLB hit, which flew over the left field fence at Tropicana Field, came in the fifth inning off Eduardo Rodriguez.

Franco is electrifying, and the poise he displayed in his MLB debut proved that he is mature enough to dominate in the show.

Franco was highly touted, and he played well throughout Spring Training. Many people around the league felt he should have started the year in the show. Franco kept working in Triple-A and dominated, slashing .315/.367/.586 with seven home runs in 39 games.

He batted second for Tampa Bay on Tuesday night, and he will stay at the top of the order moving forward.

Franco walked in his first plate appearance against Rodriguez, showing excellent plate discipline. In his second at-bat, he flew out to center, but felt he just missed his pitch.

When he stepped into the box for his third at-bat, the #1 prospect was looking for one pitch from Rodriguez. He was thrown the pitch he wanted, and Tropicana Field erupted as the ball left the yard.

The moment of the night was watching Franco’s dad celebrate as his son trotted around the bases for his first big league hit. The infielder pointed to his father in the crowd when he crossed the plate.

Reaction from the Rays

There has not been a member of the Tampa Bay Rays that has not been impressed with the rookie after his debut. Franco did not look like a 20-year-old playing in his first big league game in a significant competition against a division rival. 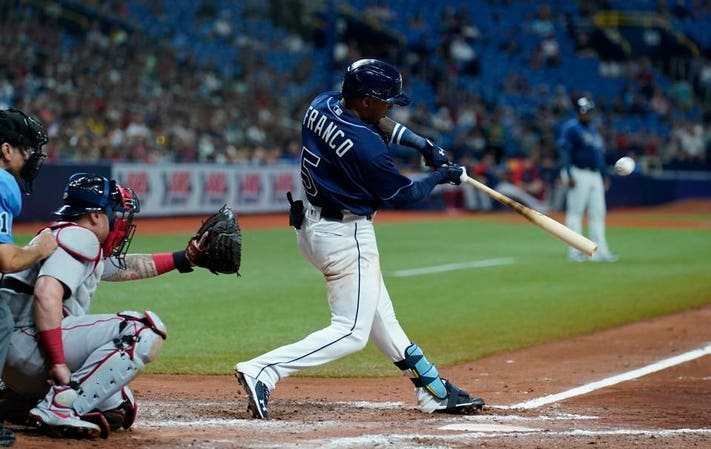 Manager Kevin Cash was disappointed with the team’s loss on Tuesday, but his excitement about the future with Franco was apparent throughout his postgame presser. Cash defined Franco as a “Pretty electric player.”

Cash was being humble because Franco electrified the entire league on Tuesday. The manager went onto discuss the Rays’ next franchise player.

“Win or loss, we’re trying to win them all obviously, but it had to be a great day for Wander and his family. A talented player that’s going to be fun to watch in the coming months.”

Franco proved that his home run was not a fluke after doubling in the seventh. Alex Cora could not help but admire baseball’s next star when asked after the game.

“What a good player he is. The way he controls the at-bat for how young he is. They have a special one.”

I know it has only been one day, but Wander Franco will be the best player in Rays’ history. This is not a bold statement considering he is competing with Evan Longoria…