What has the game of baseball come to? The umpires are striking back and not in a good way. Read below to see all about the ump show going on this season. 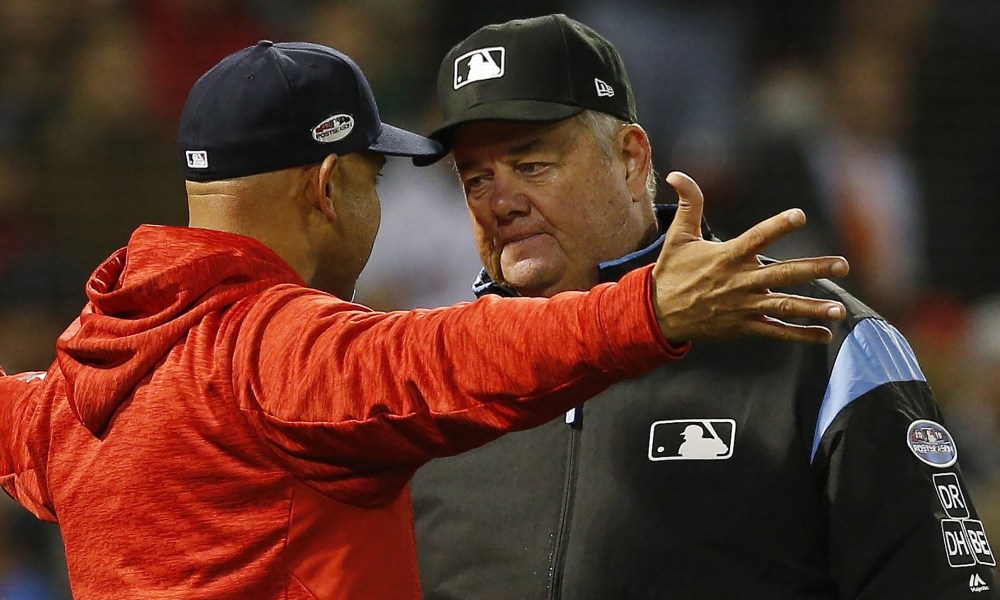 I will first start off by saying that I know how hard being an umpire is. I spent three summers as an umpire in youth baseball and worked my way up to doing varsity level games during the summer. It was the absolute worst time of my life and I have since stopped.

Not only is it 100 degrees outside under all the gear and heavy clothing but you are being yelled at by parents and coaches that have no clue what they are talking about. At times, I feel that MLB players are a bit dramatic but from what I have seen this year, what is going on?

I also get upset because I made $45 a game when umpiring and the major league umpires make an average of $235,000 a year. Not a bad gig.

We have reached the point that MLB Umpires are now being rated and given scorecards after every game behind the plate.

What is happening around the MLB is most certainly a big pissing match between players and umpires. Are the humans feeling threatened by the robots?

This little piggy went to the market

What happened to Madison Bumgarner was an absolute disgrace. On Wednesday afternoon, Bumgarner had a quick outing after allowing only one run in the first inning. That was the only inning he pitched because he was ejected coming off the field.

Madison Bumgarner lost his mind on an umpire and was tossed from the game after pitching one inning pic.twitter.com/jmyUmV7Cbd

When looking at the video, it is clear that Bellino had no intention of checking Bumgarner’s hand for foreign substances. Bellino is trying to get Bumgarner angry and trying to toss him here. As anyone would, Bumgarner felt uncomfortable about Bellino with his hand massage and staring.

That was how Bumgarner was checked and this is how the Marlins pitcher was checked for substances later the next inning. Why is this different?

The difference between the substance check on Bumgarner and the other pitcher is astounding pic.twitter.com/qooWg31SNA

Bumgarner let Bellino know about his feelings and was ultimately tossed from the game. Just a classic case of the ump show.

Kyle Schwarber speaks up for America

We all saw how Kyle Schwarber was ejected after being rung up on a tough call by Angel Hernandez. It seems that every time Hernandez takes the field, we are waiting for an unreal moment to happen. That is exactly what took place on a Sunday night game between the Philadelphia Phillies and the Milwaukee Brewers.

Let’s be honest here. Schwarber is speaking for all of America.

The best part about this scenario is that Schwarber is not only complaining for himself and his team but he is also sticking up for the Brewers. It was a rough night for Angel Hernandez.

Even when Hernandez makes the right call, people still get angry. This week in the Oakland Athletics and Tampa Bay Rays games, Hernandez called a balk on a pickoff move. The Oakland announcers and manager Mark Kotsay were not happy but Hernandez actually made the right call.

I am 100% against robot umpires and electronic strike zones. As a baseball traditionalist, a human making a mistake adds to the game. It allows us to learn that life is not fair and it does not always go your way.

No one wants to see an umpire make a game-changing call that affects the outcome of the game dramatically, but human error is part of life and the game of baseball. What happened to Marcell Ozuna on Wednesday was brutal as well.

Ozuna struck out on three-straight balls.

The ump show festival this year is unreal pic.twitter.com/HaknbkZVXf

I may be against robot umpires but this is tough to watch.

Unfortunately as a society, we only remember the bad and the ugly. We never appreciate the good. No one ever comes home from a sporting event saying, “what a great game by the umpires (or officials) tonight.”

In the long run, umpires are more right than they are wrong. Keep that in mind the next time we see someone join the ump show.