Who Is the Best Player in Baseball Right Now?

The 2021 regular season is underway and will begin tomorrow, April 1st. This off-season has been filled with many notable acquisitions and trades. All-Star players such as Francisco Lindor, Jackie Bradley Jr, Justin Turner, Trevor Bauer, Andrew Benintendi, Nolan Arenado, Yadier Molina, and many more have either found new homes in Major League Baseball or have re-signed with their current team.

What makes the 2021 MLB season so special is the presence of rising young talent around the league. Notable players such as Fernando Tatis Jr, Jacob deGrom, Gerrit Cole, Ronald Acuña Jr, and Mookie Betts have taken the spotlight and have showcased extreme talent on the field. So, this raises the question; Who is the best player in baseball right now?

Who Is the Best Player in Baseball? 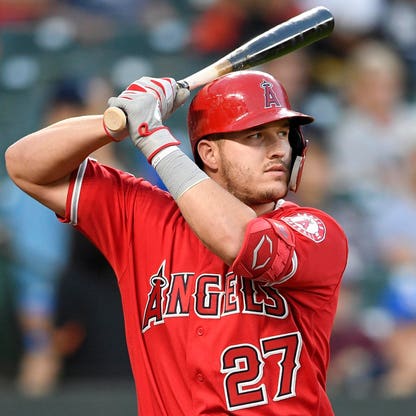 That’s right! Mike Trout is undoubtedly the best player in Major League Baseball. In fact, he is the definition of a five-tool player. What separates Mike Trout from all the other Major League Baseball players is his speed, arm strength, fielding, ability to hit for power, and ability to hit for average. Not many players, if any, are capable of displaying all five tools as consistently as Trout.

So far, throughout his career, he has an outstanding .304 batting average with 302 HRs. Throughout his career, Mike Trout has stacked up a WAR of 74.1, a .418 OBP. Mike Trout ranks 52nd of all-time players with his 74.1 WAR, surpassing Hall of Fame legends such as Reggie Jackson, Derek Jeter, and Miguel Cabrera. If Trout were to retire right now, he would be a first-ballot Hall of Famer and would have an easy entry into Cooperstown.

In every season of his career, Mike Trout has averaged 33 home runs, 88 RBI’s, and 22 stolen bases, with a .582 SLG% on his entire career thus far. It’s safe to say that the Angles will never let him go or even think of the possibility of a trade, considering that they gave him a 12 year, $426.5 million contract. When Trout signed the contract in 2019, this made him the highest-paid player in professional sports history. The only other player in sports with a higher salary than Trout is Patrick Mahomes. To get a more in-depth breakdown of Mike Trout’s stats, click the link here to have your mind blown away.

As a New Jersey native, nothing makes me happier than seeing Mike Trout represent NJ baseball talent to the fullest extent. New Jersey is not the ideal landing baseball spot, unlike warmer areas such as Florida and Texas. Mike Trout is as tough as it gets and puts NJ baseball players on the map.

To truly understand Mike Trout’s God-given talent, I decided to share with you some highlight videos to give you a better understanding of this absolute hitting machine.

I hope you enjoyed this article! The 2021 MLB Season will be an interesting one and baseball fans around the United States cannot wait to see what Trout will do this season.

Shohei Ohtani future in Los Angeles is still uncertain. Let’s take a closer look and see what the future has in store for the talented all-arounder! […]

Shohei Ohtani is one of the best pitchers in all of Major League Baseball, making him a very fun player to watch. Oh, did I forget to mention he is also one of the best […]