Red Sox vs Yankees on Saturday was the epitome of a wild night at the Bronx Zoo.

The Yankees defeated the Red Sox for the first time this season on Saturday in six innings. Torrential downpour throughout the city caused the game to be called after New York took the lead in the bottom of the sixth.

Does this victory mean that New York is back in the division pennant conversation?

No. However, it was a necessary win for the franchise on a wild night in the Bronx Zoo.

Gerrit Cole pitched well throughout Saturday’s contest, following up his 129-pitch shutout of the Houston Astros with a six-inning complete game. Cole struck out 11 and gave up one run on five hits in the outing.

After the game, Cole was elated about the Yankees evening the series.

He said, “I thought it was a big win. I thought out of the seven losses to this point, there were a few games that we were in, maybe even could have finished off with a W.”

Aaron Boone spoke to the media before the game, and he was asked what he expected out of Cole against Boston on Saturday. The skipper said that he always expects Cole to pitch well, and that was no different heading into a crucial game against the Red Sox.

After the game, Boone stated, “He leaned on a little bit of everything. I thought his fastball got really, really strong as the outing went on.”

The Yankees earned the six-inning win because of Gary Sanchez and Gleyber Torres. Heavy rain started coming down in the bottom of the sixth. This coincided with a Bleacher Creature throwing a ball at Alex Verdugo in left field.

Verdugo, one of the most passionate players in baseball, began screaming at the crowd. Umpires, crew members, and Red Sox staff swarmed the outfield to protect Verdugo and remove the fan from the game. 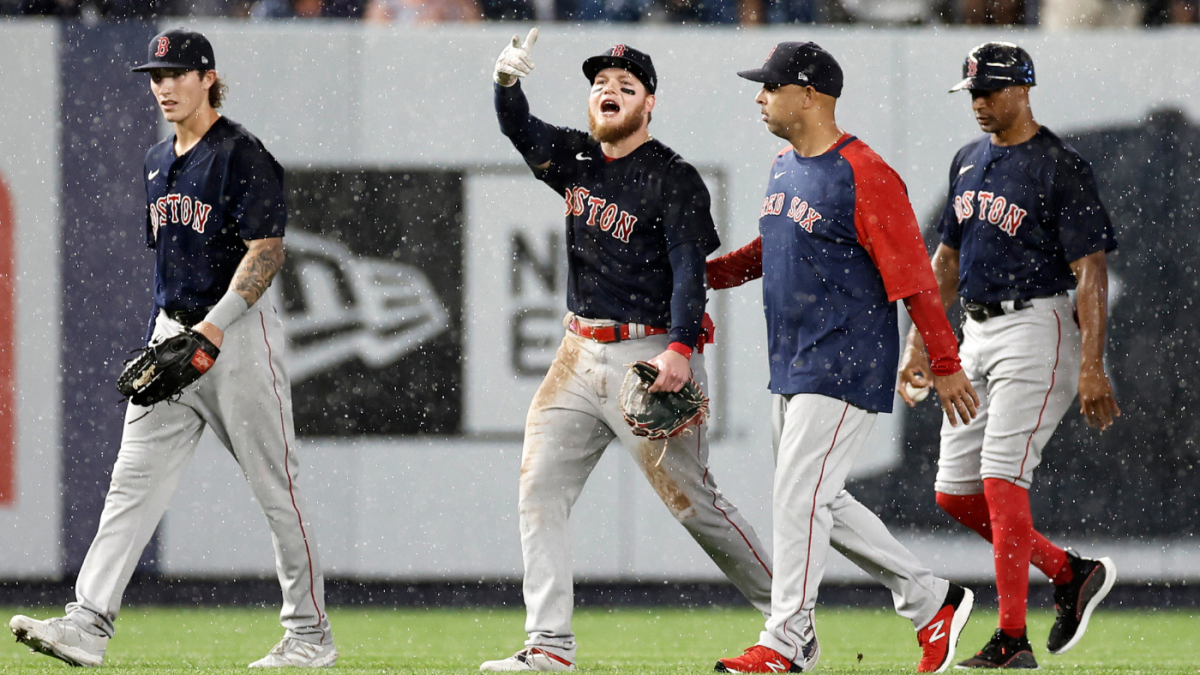 The rain continued to fall, and players were removed from the field. Nathan Eovaldi, who started the game, was replaced by Hirokazu Sawamura, who had to rewarm up after the delay.

Once the action resumed, it was apparent that the game would end when one team took the lead. New York struck thanks to back-to-back home runs from Gary Sanchez and Gleyber Torres. As soon as the inning concluded, the game was called.

The Red Sox were not given a chance to respond at the plate. Rules are rules, but Boston felt like this game was stolen from the club.

A fan throwing a baseball at a player is unacceptable, and both managers made that clear following the game.

Red Sox skipper Alex Cora said, “This is just a game. It’s a game. It’s not life and death, and it’s not this drama, and the fact that people come to the ballpark and they decided to throw a baseball (at) one of the players, I was in shock that that happened.”

Boone added his two cents following the game as well.

Game three is scheduled for 7:05 PM ET on Sunday night. New York is a slight favorite in the matchup.

The Yankees dropped three of four games to the Red Sox this weekend, and the sky is falling, according to New York fans. Let me preface this article by saying that I am a diehard […]